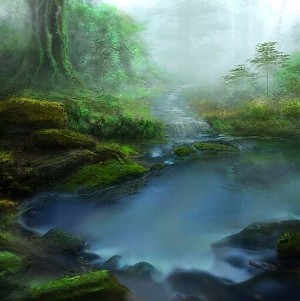 She swam even though they had come into the world, the abominable goliaths–having burst through the rips, the tears, and the thin spots in the floors of the seas and the fabric of the skies–and into the crowded cities.

Still, she swam–and not to flee from them, mind you–her, funny enough, the only one calm yet the only one with knowledge and sight wholly of what monsters they were and why they’d arrived.

It was the scent that called them, imperceptible to us as nothing more than burs in guts and venomous slugs in hearts. If we could smell it, it’d be like burning copper and sulfur. To the goliaths, it smelt of the richest, temptable steaks and confectionaries, (which is the closest comparison the rest of us are capable of grasping). It was so pungent to their senses, they awoke from permanent slumber.

The sea goliaths brought with them the salty waters, which they expelled from their chest cavities and out through their gills upon their equivalent of exhaling; emptying themselves of what was unnecessary and innocuous to them, would be a more accurate description. This act flooded the streets, ten feet deep, and everyone scrambled for higher ground or rooftops. The goliaths who’d ripped through the sky, emptied themselves of stormclouds and thunderous winds.

Yet, she swam in the streets.

To make room inside themselves for what they’d come for, the goliaths’ purging was necessary. Also, as they walked, crawled, or flew–as no two were alike–they cleared a pathway that made a direct line to that which they sought. It wasn’t that they were heartless or destructive, they were unfocused on anyone or the value of human things. They’d knock down buildings or power lines that obstructed their way towards the thickest source of the delectable agitation they smelled.

Mouthless, the goliaths imbibed their sustenance through their pores and breathed it into their bodies, although they were lungless. By proximity to the source, it saturated and nourished their minds directly. It wasn’t air, animal, mineral, or drug that’d called them from the beyond, but the struggles, strife, and rage of man to man.

Almighty God knew it himself, by now, we’d all built an incomparable abundance for them to feast. Yes, intangible to us, but a goliath took a bite–so to speak–of unkindness here, whilst another slurped up selfishness there, and a third would kiss ignorance-based contempt if either had had lips.

They spotted her, the swimmer.

Many goliaths had come upon her neighborhood because the area was feast-worthy. She stood out, not running for her life, not huddling, screaming, nor praying for the terror to end. She meandered through the flood water, naked, sometimes just treading water.

Her actions didn’t change when her eyes of purple met their eyes of fire and gold. Everyone else, consumed with feebleness, only saw water and storms, (not the goliaths), and this alone frenzied the people. It was a blessing that they couldn’t see the 500-foot beings, scales, claws, wings, tentacles, horns, bony plates, or a mixture of some of these, each goliath unique. The beings then looked at one another, confused by her.

This water was different to her, having come from beyond and having once been inside goliaths, filtered through them and changed. Neither good nor bad. It had an electric property she detected. A life. It fizzed and popped, tingling her spirit. She stargazed, relaxing into backstrokes, in the crisp, coolness of it, parallel to the burning buildings around her and the broken power wires that crackled and sparked overhead. But she didn’t worry.

The stench of her Mona-Lisa smile disgusted the goliaths who lost their appetites and reeled back. Back. Backwards to the rips and the tears that birthed them here, to sleep an indeterminable amount of time once again.

When they were gone, when the cities later settled and calmed, the swimmer stopped swimming for a time, resuming routines.

She traveled to a forest one day, for quiet reflection. She wandered deep. On a high, wooded cliff, she found a hidden pool there, and she somehow knew the goliaths’ water and storms remained within it.

She swam in the tiny pool.

She floated in it.

Oh, how she floated!

And she felt electric again.

26 thoughts on “Swimming with Goliaths”

There was an error retrieving images from Instagram. An attempt will be remade in a few minutes.

Most Recent Comments on FFP

Readers Liked These Posts Most